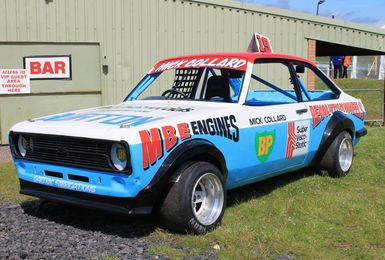 August 15th 2015 marks a very special moment in the history of the Racewall – 50 years to the very day that the first Stock Car meeting was held at Central Park.

To mark the occasion we have a very special event planned for that day which no Stock Car fan will want to miss as Stock Car legends Day comes to the Racewall! Gates open at 1pm with many of the legends drivers taking part in timed lap trials from 2pm. The fun really starts around 5.30pm however when alongside racing from the current stars in the Saloon Stock Cars, BriSCA F2s and Ministox there will be Speedway style Match races amongst the Legends including a few surprises and extra challenges plus the first ever demonstration runs for the amazing Classic Hot Rods.

Legends Day
Amongst those who have intimated that they will attend are Tenant Douglas who competed in the very first Cowdenbeath meeting whilst depending on commitments the Legends team hope to attract most of the Scottish drivers who have won World Championship which would include the likes of Gordon Brown, Bob Jones, Jimmy Wallace, Allister King, Vic Russell, Chris, Ernie and Harry Burgoyne, John Fortune and a few more from the other formulae that have raced. Sadly former Promoter and World Champion Gordon McDougal will now be unable to attend as he is currently overseas.

However such is the lure of a Legends Day and the 50th Anniversary that there has been interest shown from the likes of Conrad Self, Eddie Aldous and Eddie George from South of the border, whilst old time favourites include Robert Bruce, Kenny Ireland, Hamish Buchanan, Charlie Milne, Les Clark, Bill Pullar and Doug Farrer. All told round 200 legends have shown interest.

It is planned that the legends will be located in the bar area where there will be autograph sheets for those who want to get their heroes to sign whilst in the afternoon drivers who are able to can try their luck on the track in cars to see who can set the fastest laps!

There will be quizzes and photographic sessions where the pubic can have their photos taken with their present day or latter day heroes.

At night there will be four teams racing in speedway format with teams from open wheel, saloons, hot and stock rods and international drivers who are willing to entertain with their races being slotted in between the cars that are racing that night.

There will be quite a few cars on display and it is hoped that the replica cars of 41 Gordon McDougall, 19 Mick Collard as well as some static Classic Hot Rod displays.

Mark the date in your diary now—you don’t want to miss it!

GMP Scotland are indebted to the hard work and efforts of all the Scottish Legends Day team who have put in many hours of tireless work to organise what is set to be a brilliant celebration of Stock Car Racing in Scotland. Search for Scottish Legends Day on Facebook to see more about this great event that the Legends team have organised.