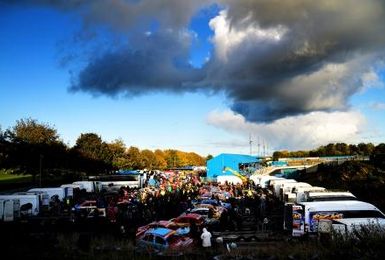 We are pleased to confirm the full 2016 racing calendar here at the Racewall. As well as being listed on our fixtures pages these dates are also included below for those who wish to make their own copy of the dates.

The season sets off early with a special event at our pre-season practice session on the 21st February where a who's who of Saloon Stock Car legends will battle it out on track over a series of races as part of the fundraising efforts for Joan Purdie. Following two open practice sessions the season proper commences on the 12th March and quickly gets into gear with the first Championship event on the 16th April as the best banger drivers in the country converge on the Racewall for the 2016 BBA Banger World Cup. April also sees the first of the Saloon Stock Car Celtic Challenge Series which sees rounds both here at the Racewall and over in Northern Ireland and culminates in a Final here later in the year. Further details will be released shortly but the series will provide extra incentives for drivers in both countries to compete for.

The season ramps up a gear in May with the Prostocks European Championship and what looks set to be one of the highlights of the year with four major events on offer over the 14th & 15th May. The BriSCA F2 Scottish on the Saturday headlines alongside a memorial event for the Ministox (who are in action over both days) in memory of Keir Millar. The Saloon Stock Cars and Stock Rods will commence their British Championship qualifying process with the Championship finals on the Sunday alongside the annual Raymond Gunn race for the Saloonatics. The big events continue for the BriSCA F2s with their World Qualifying Round paired with the WQR at Crimond the following day. The month rounds out with another big banger event with an England versus Scotland team event, the follow up leg taking place at Stoke in August.

The first half of the season ends on a roar as GMP Scotland and Startrax work together to host the return of the mighty BriSCA F1 Stock Cars and National Ministox backed up by the very best - BriSCA F2 and Saloon Stock Cars.

After the traditional summer breakthe action continues with all our formulae including the 1300 Stock Cars and Micro F2s having ample opportunity to entertain race fans. Banger Fans are also well catered for with Micro Bangers featuring in July and September, the return of the Siamese Bangers in their Scottish Championship on the 14th August and the 2L Scottish in October.

The weekend of the 13th and 14th August allows us to mark one of the most significant moments in Scottish Stock Car racing history, the 40th Anniversary of 41 Gordon McDougall's World Championship win back in 1976 becoming the first Scot to have lifted the title. As well as a traditional race meeting on the Saturday evening a special event on the Sunday will be dedicated to the Legends of our sport when we are once again proud to host the Legends Day team with the opportunity to meet up with old friends, compete in time trials and match races and see some great machinery out on track.

One of the highlights of the BriSCA F2 year at the Racewall rounds out August with the George MacMillan Memorial race defended by 647 Chris Burgoyne. The meeting will have an old-school feel to it with the Heritage Stock Cars back in town - this time joined by their big brother F1 cousins. As the season races to its conclusion September sees the first of the years Scottish Championships being contested with Championship events pretty much every week through to the end of October when the season rounds out in style with BriSCA F2 Stock Cars having a rare speedweekend alongside the tiny terrors in the Micro F2 class alongside the traditional Saloon Stock Car UK SuperBowl and Gordon Barclay Memorial double header.

A season packed full of highlights at the Racewall then. Keep up to date with all the latest news here at www.racewall.co.uk